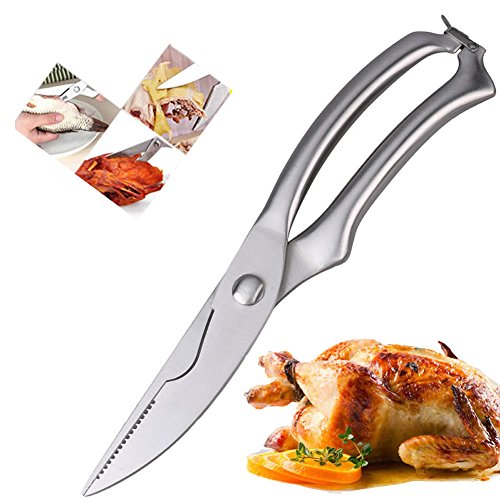 This pair of Kitchen Shears is exstreamly heavy duty. They are made from a strong stainless steel. There aren't any plastic pieces that can break on this set and this is one of the reasons I bought them. Previous sets I have owned in the past broke because of them being plastic. This is a very durable set that will probably last my lifetime. The handle is curved on the top and bottom making them easy to grip. They are a bit large for my hand but still feel comfortable to hold.

At first, I was super excited and thought that I had a 5 star+ set of shears. Then after using them several times, I discovered that the tip of the shears is sharp and gets the small jobs done but the middle to back of the blade is totally dull. If cutting strong pieces of cartilage and bones I would want that area of the blade to use and it would have to be super sharp in order to cut through it. This is such a heavy duty set that should last for years I've decided to take them to a professional to get them sharpened correctly. Then I'll have myself a 5-star product.  Other than that issue I really liked this pair of kitchen shears.

My favorite feature is the spring loaded handle. It makes using the shears much easier on my hands. It takes a lot less effort to cut with them because of the spring loaded handles. I like that they also put a strong lock on the tip of the handle. This is a nice safety feature and keeps them closed when not in use. Overall this is a good set of kitchen shears and with a better edge on the blade, it would be a great pair of shears.