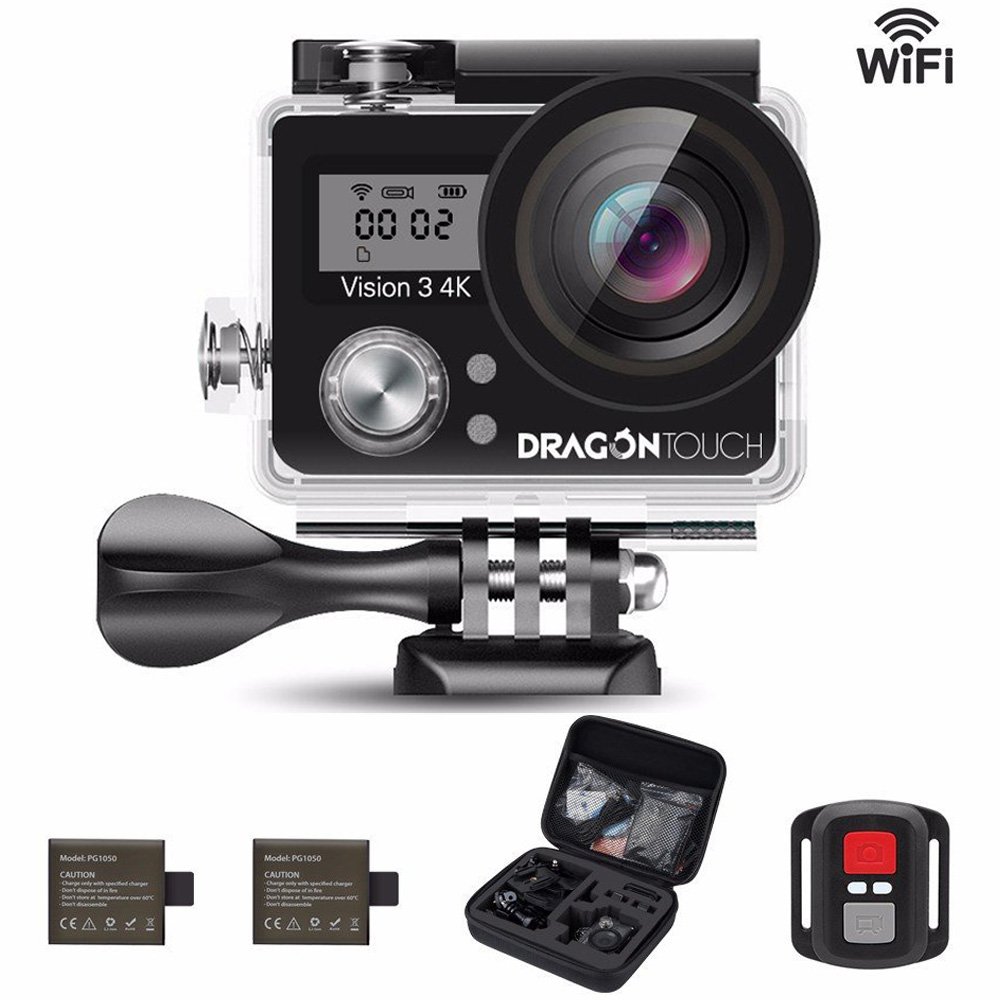 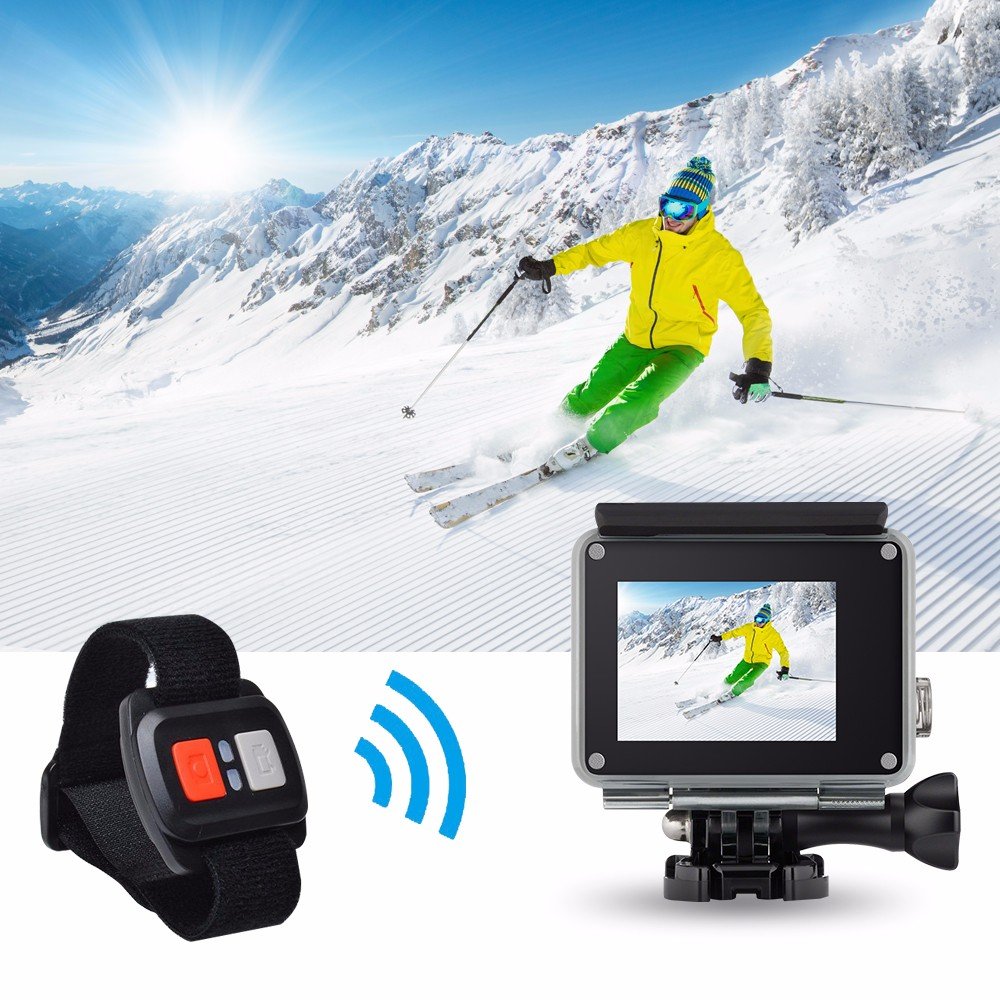 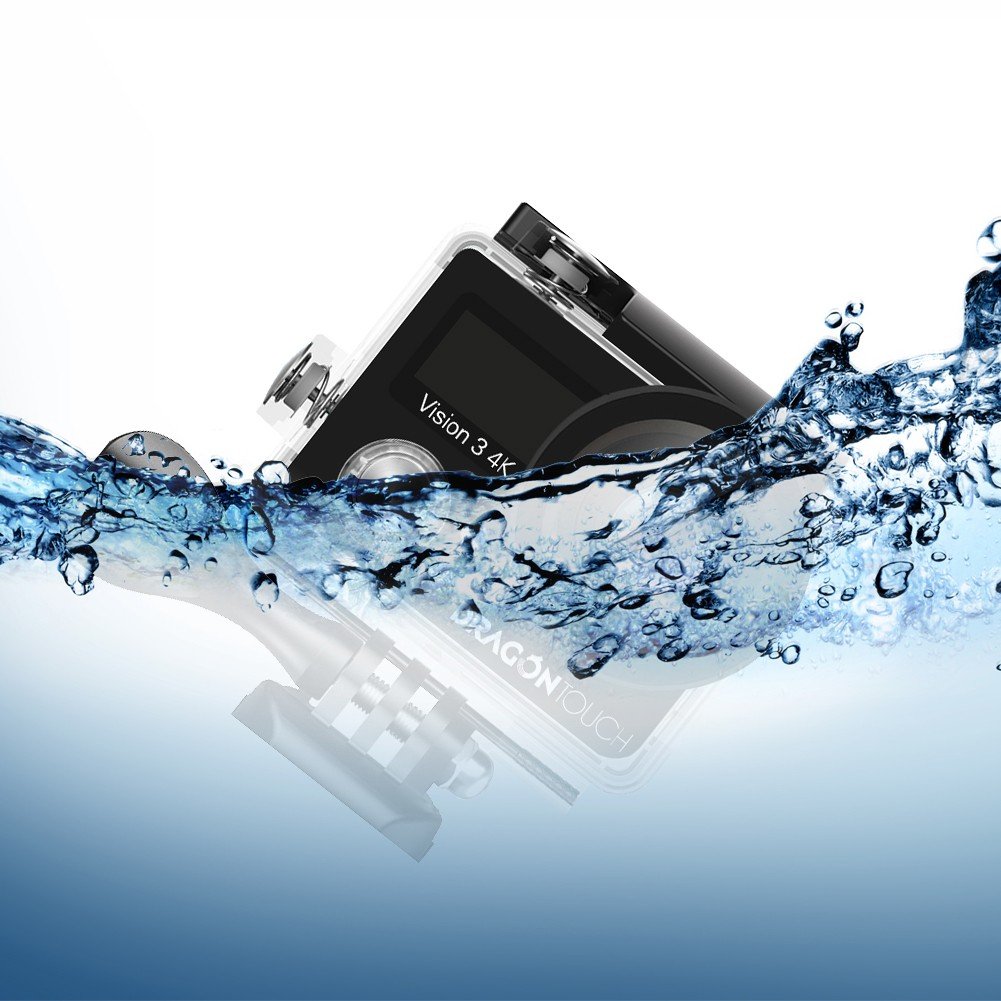 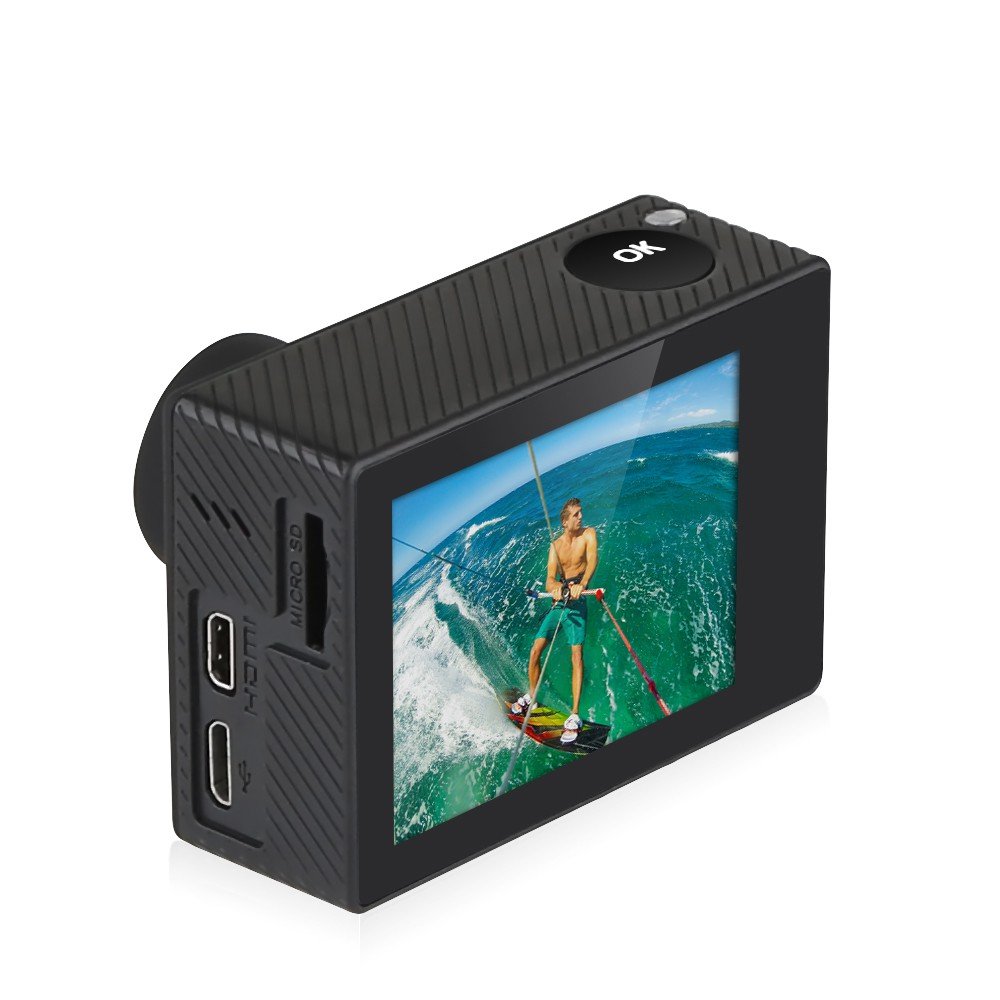 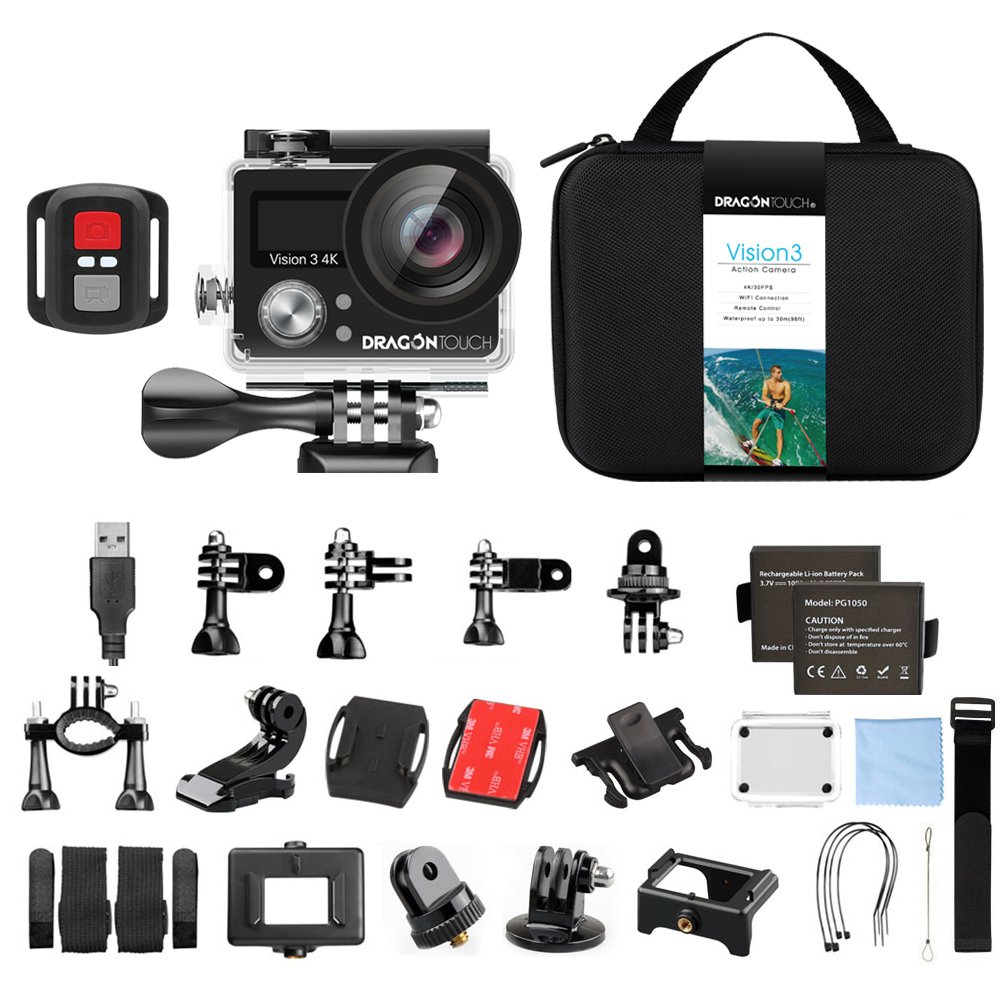 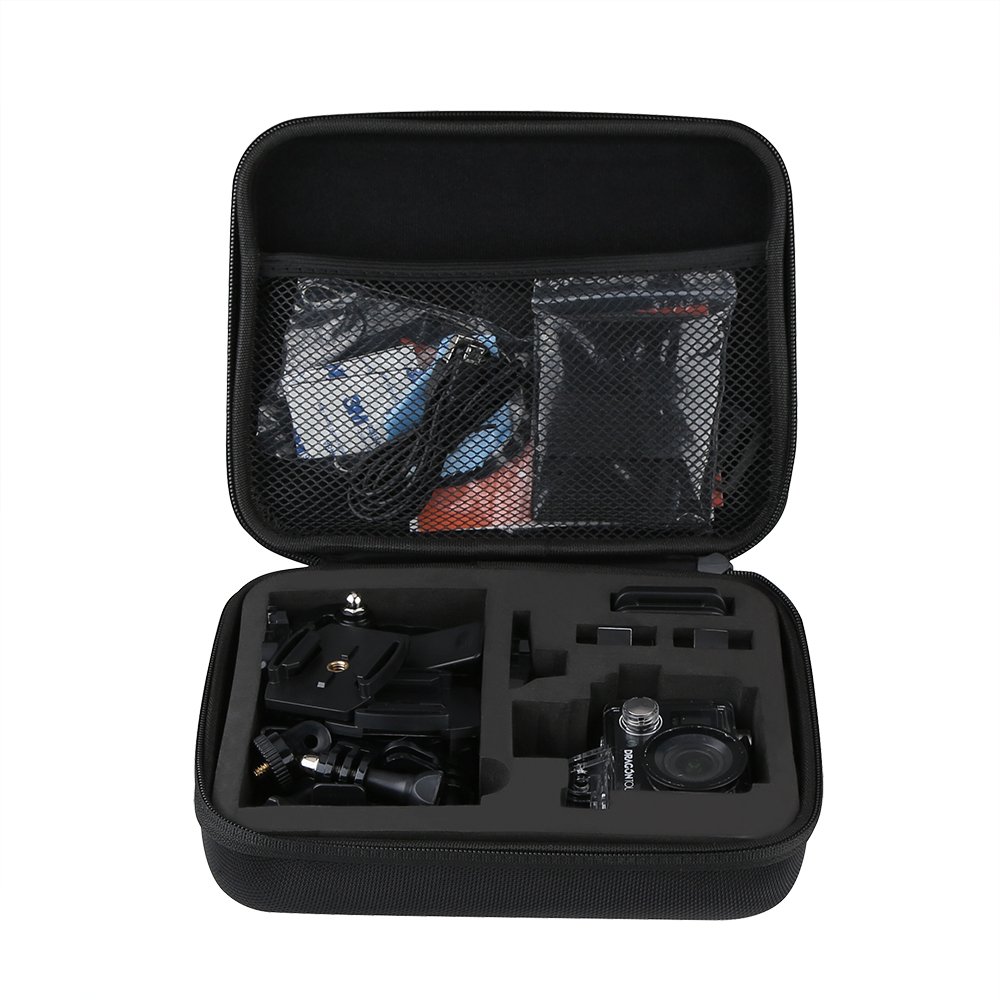 Many people have reviewed this camera showing all the equipment you get and some imagery. I'd like to review this compared the GoPro Hero 4, as it's something I was trying to match when buying this.

I bought my GoPro Hero 4 in 2015 and I've used it in lots of situations. The video quality is amazing and I'm sure it's worth the £300+ I paid for it. I now use it for cycling mainly and have it mounted on the front or rear of my road bike. But I wanted front AND back at the same time, so I started looking for another action camera. I didn't want to fork out the same amount of money though. I watched many Lightning Deals on Amazon and bought cameras one by one, tried them out, and sent them back. These cameras didn't have what I wanted. I was looking for a camera that would fit in my GoPro housings (I have a lot), would easily show me the status and whether it was recording or not, and would take the same capacity of microSD card that I use in my GoPro.

Then I saw the Dragon Touch Vision 3. The front LCD was similar to the GoPro, the LED lights were also similar (if in a different place), and the side/front/top buttons were exactly the same in position and function. I bought the Dragon Touch Vision 3 on those points alone, and the fact it stated that it would take up to 64GB cards good, even though I can get 128GB in my GoPro.

When it arrived I tried the 128GB card in the Dragon and it worked. I fitted it to my rear saddle, and my GoPro to my front bars and went for a ride. The Dragon (with 128GB microSD) was recording in 4K and the GoPro in 1080p (with 64GB microSD). I knew both cameras were recording as I could see the red LEDs flashing on both units.

Halfway through my ride (1 hour) I stopped for a coffee and changed the batteries in both. They weren't flat, but I knew they wouldn't last for another hour. With the LEDs flashing red and loaded again I set off for home. When I arrived both cameras were still recording. The Dragon on the rear had picked up some road dirt, but the housing had protected it damage.

On reviewing the video I noticed that the Dragon had recorded 30GB of data (at 4K) and the GoPro had recorded 50GB of data (at 1080p). When I viewed the video I could tell the difference. The GoPro is much better, I can read number plates from further away, the colour balance is better, the white balance adjustment happens quicker, and the pixel density is greater.

But, in the end, I publish my video with the front camera as the main video and the rear camera at a 15% size in the bottom right of the main pane. If I was to use my videos for professional productions I would choose the GoPro, if I wanted to post a video on social media or try to get £250 on You've Been Framed then the Dragon is fine. The best part is that I can use EVERY accessory I have for my GoPro with the Dragon, including the housing. Even better, I can use a 128GB card with the Dragon, and if it's recording 2 hours in 4K using 30GB then I can possibly record 8 hours with the 128GB. The only problem is that it's not really 4K in my opinion.