Perfect if you want to light an area via motion sensor 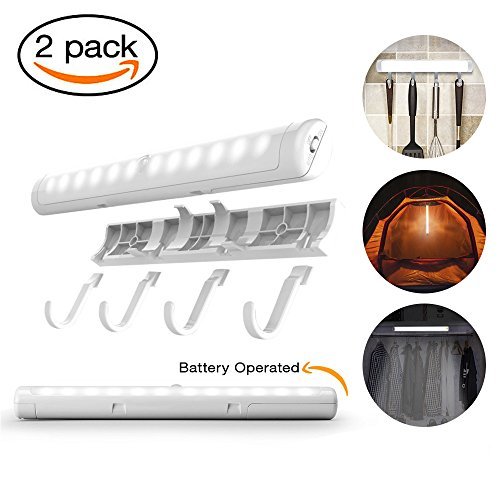 I purchased these to put in my kitchen. We currently have lights in there that get left on all night long, meaning that they just keep pushing our electric bill forever higher. That being the case, I realized that I wanted something that would light up the area when someone walked into it, but I didn't want them to do so during the day because it is not needed. These are perfect for that! They are motion triggered, so they only light up when someone is in the vicinity. Also, since they don't light up except when it is dark, they won't just keep using up power for no reason. These particular ones are battery operated and require 3 AAA batteries that do not come with them (bummer – would have been nice to have a set in there, but at least they warn you in the description). These run through batteries a little more quickly than I would like, but I am using really cheap batteries, so I may try them with some that are more robust when I next change them.

These are as easy to install as they are to use. They come with screws as well as double sided adhesive tape so that you can mount them whichever way you choose. Depending on where you intend to use them, it might better to use the screws, but for my application, the tape worked just fine. The light itself doesn't attach to the wall, but instead fits inside of a bracket that attaches to the wall. This works out really well because you can easily remove the light from the bracket to change the batteries without having to try to reinstall the light. Since the included hooks attach to the bracket, you also won't have to remove these. The hooks are great because they allow for large utensils to be hung up so that they are not taking up space elsewhere. If you are like me, anything that will conserve space is extremely useful.

Other features of this light include an extra hook that slides out of the side of the light, in case you prefer to hang it up vertically, without the bracket. This would be really useful if you wanted to temporarily hang the light from something as you could use string or some other means to tie it in place. This would likely be useful if you were camping as the light could be attached inside of the tent using string or possibly a clamp. A second feature is the ability to turn the light on and off. There are actually 3 settings on this light, including off, on, and auto. The auto is what I use because it utilizes the motion sensor. If you prefer not to use the motion sensor, you can turn the light on or off by using the switch on the side.